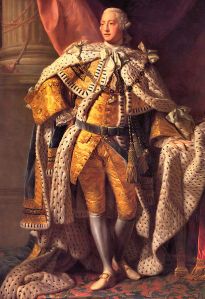 ‘King George had simple tastes, and was happiest when he was away from London. His nickname [‘Farmer George’] was not ill-chosen: he loved the country, and was knowledgeable about farming, writing little pieces for a periodical called “The Annals of Agriculture” under the pseudonim of Ralph Robinson. Out of doors at Windsor he behaved like a country squire rather than a king, chatting with farmers about the weather and the crops, dropping in, friendly and voluble, on surprised cottagers. Although, inside the castle, the most elaborate etiquette was observed, out of doors the King liked to stroll about unattended. His tall, ungainly, pear-shaped figure in the blue uniform of his own design often appeared unexpectedly and joined in a conversation (…) His own habits, both of eating and drinking, were abstemious. Determined to overcome the tendency to enormous bulk which was the heritage of his family, he walked and rode energetically, exhausting his horses and his equerries. His meals were regular: breakfast at nine and dinner at four. What he ate was as carefully chosen and as frugal – in those days of gormandizing – as a modern slimming diet. He lived on cold mutton, salad and fruit; and on Sundays he ate roast beef with vegetables, turnips for choice. His greatest indulgences were plovers’ eggs and cherry pie, and he enjoyed a nice cup of tea.

(an extract from Thea Holme’s ‘Prinny’s Daughter. A Biography of Princess Charlotte of Wales’)

This entry was posted in Family and tagged george III king of the united kingdom, prinny's daughter: a biography of princess charlotte of wales, thea holme. Bookmark the permalink.

This site uses Akismet to reduce spam. Learn how your comment data is processed.