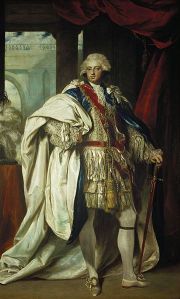 Frederick Augustus (16 August 1763 – 5 January 1827), second son of George III of the United Kingdom and Charlotte of Mecklenburg – Stirlitz, the Duke of York and Albany (1784 – 1827), Commander-in-Chief of the British army during The Napoleonic Wars who reorganised and modernised the army significantly, an heir presumptive to the throne of the United Kingdom and Hanover after his niece’s sudden death, Charlotte’s paternal uncle.