Mother Uses Charlotte As Her Pawn

The two closest of these were the brilliant but unscrupulous Scottish lawyer Henry Brougham and a rich, vulgar brewer’s son, Samuel Whitbread. Like the Tories they leaked little stories to the press, representing the Princess of Wales in the best light they could, and her husband, which was easier, in the worst; and they waited patiently for the opportunity to manipulate the relationship to their best possible advantage. It was not a long wait.

Early in October Charlotte went up from Windsor for one of her now rare visits to her mother in Kensington Palace. Since Lady de Clifford was suffering from any eye infection, she was escorted by one of the Queen’s lady companions.

Before they left the Queen gave her companion, Miss Cornelia Knight, strict instructions. ‘Do not let Princess Charlotte go out of your sight for one moment.’

She was equally firm with her granddaughter, telling her ‘not to retire at all’, to which Charlotte answered understandably that she would have to retire for dinner and that there was nothing she had to say to her mother that she was not prepared to say in front of anybody else.

But by then the Queen’s caution was no longer necessary. A few weeks earlier Lieutenant Hesse had sailed with his regiment for Spain.

In the following week the Princess of Wales wrote to the Queen demanding that her daughter should be allowed to visit her more often and threatening to come down to Windsor unannounced if she was not. On the advise of Brougham and Whitbread, who probably wrote the letter for her, she sent a copy to Charlotte.

Innocently, Charlotte told her grandmother. The Queen, who had decided to ignore the letter, was concerned to learn that there was a copy of it. She sent for the Prince Regent. The Prince Regent sent for the Prime Minister. When Charlotte was summoned she told them that she had burned the letter. Somehow, the Prime Minister managed to persuade the Prince and his mother that they were worrying about nothing, and that there was nothing they could do about it anyway.

A week later, however, when Charlotte went on her scheduled fortnightly visit to Kensington Palace, her mother persuaded her to tell her everything that had been said at the meeting. When Charlotte seemed apprehensive, her mother reassured her. ‘She did nothing without good advice.’ And then, after another week, to Charlotte’s bitter amazement, her ‘accurate’ account of the family row appeared in several newspapers.

Using Charlotte and her mother, the Whigs had succeeded in reducing the Regent still further in the eyes of the people. They had forgotten the earlier rumours about the Princess of Wales. To them she was now a thwarted mother as well as an abandoned wife, and the Prince Regent was more than ever a decadent bully.

After that, when Charlotte drove out in her carriage, she was greed with shouts of ‘Don’t desert your mother, dear!’ 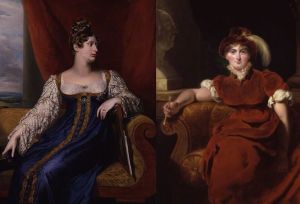 The Prince was now Regent with Unrestricted Powers, and finally abandoned his Whig friends: the moderate Whigs, Grey and Grenville, had refused his invitation to join the Government and form a coalition; and Spencer Perceval remained the leader of a Tory administration*. Charlotte, strongly in favour of reform, Catholic Emancipation and all that the Whigs stood for, was learning not to discuss politics in the family, but she felt very bitterly her father’s desertion of the party, and, according to Lord Glenbervie, wept when she heard the news. The Regent was aware of her attitude, and believed her to be strongly influenced by Mercer. He determined to break the friendship(…)

The doors of Carlton House were closed to members of the Opposition, and Mercer Elphinstone was asked to cease her correspondence with Princess Charlotte. Meanwhile, the Queen had taken up the cudgels on her son’s behalf, and summoned her granddaughter for a little talk on the subject of Royalty and Politics.

Queen Charlotte was sixty-eight, and beginning to grow enormous from dropsy. She had courage, and a sense of humour, but suffering had hardened and stiffened her: she had not give vent to her feelings, but lapsed into cold, violent anger when she was thwarted. She visited her husband regularly and conscientiously, taking always a daughter with her. According to Princess Mary, the Queen’s unfortunate manner made these interviews even more painful than they need have been. She ruled her daughters with an iron rod, which she now tried to exercise upon her granddaughter.

She began by assuring her that she should look upon her father as ‘the only source of her happiness’ (news which must have struck a chill into Charlotte’s heart), and that she must be ready to accept his judgement in all things, ‘as her father must of course, not only by right but by experience, know better what was for her good’. She went on to warn Charlotte against forming particular friendships: although she should be civil to everyone, she should be careful to show no partiality for one person, and especially she should avoid any form of political friendship, which could never be depended upon. Having dropped these heavy hints, the Queen added a further warning: ‘That any member of the Royal Family taking a part against the Crown was lowering it most essentially.’

The Queen felt that she had made an impression, and Lady de Clifford told her later that Charlotte was ‘much pleased’ with the conversation, which seems hard to believe. Her father’s dictum forbidding her to correspond with Mercer came as no surprise, but the blow was overwhelming. Mercer was her best friend, the only person to whom she could confide her problems, her happiness and her misery; and who gave her wise advice. To be cut off from her was to be cut off from everything that made life bearable, and Charlotte, now spending all her time at Lower Lodge, Windsor, grew listless and wretched.

For six months she endured; but by the end of August she felt that she could bear it no longer. She decided to break the promise extracted from her by her father, and to find some means of communicating secretly with Mercer. Lady Charlotte Lindsay, her mother’s lady-in-waiting, offered to act as go-between, and on August 24 she broke the long silence.

‘I detest everything that bears the name of clandestine,’she wrote, ‘but I call this not so. I hold myself absolved from the promise that was extorted from me, not to hold any communication whatever with you. It is an unjust&cruel requisition.’

The letter was an outpouring of all her woes, which seemed almost to have unhinged her. She invests the Lower Lodge with a kind of Gothic gloom, describing it as ‘a perfect prison’, where she is surrounded by spies; and though there is something of her father’s love of drama in her description of her plight -‘a regular system of persecution seems to be the thing’- Mercer cannot have failed to feel pity and anger as she read it. Charlotte was being made to suffer cruelly in ‘this infernal dwelling’ as she called it, and it looked as if her health was affected. The house was damp, or more probably suffered from bad drains, and the relaxing air of Windsor did not agree with her. ‘None of my household have been well. I sleep but little, or suffer from severe headaches or colds… I think,’ she concludes, ‘could you see me, you would finde me very much altered, grown very serious and thoughtful at times.’

This serious, thoughtful Charlotte was devoting herself to ‘studdy’, which she described as her greatest resource, as it passed away hours of ennui. Drawing and music occupied most of her time; it was true she went for rides, but these were ‘far from agreable, as always in the compagny with the Princesses’.

‘I will not deny to you that I am far far from being happy.’

* On May 11th 1812 Spencer Perceval was assassinated in the lobby of House of Commons by John Bellingham. Robert Banks Jenkinson, 2nd Earl of Liverpool has succeeded him as the Prime Minister.