Between One Tragedy and Another

Charlotte was still bleeding. Her uterus had not fully contracted after the birth. It was now shaped like an hour-glass, and it looked as though it was not going to contract any further. Rather than wait for the placenta to be expelled naturally, Croft and Sims decided to remove it by hand. When that was done, apparently successfully, the bleeding stopped.

At last Charlotte was given some nourishment – chicken broth and toast washed down with barley water. She was also given camphor julep to stimulate her heart, and soon afterwards she became animated and began to chatter a little hysterically.

Mrs Griffiths, who had been awake and in the same dress for three days and two nights, went away to wash and change.

‘How smart you are, Griffiths’, said Charlotte merrily when she returned. ‘Why did you not put on the silk gown, my favourite?’

Two hours later, when they had been reassured that the Princess was doing well, the sad and weary witnesses went home. Leaving Charlotte to sleep and Mrs Griffiths to watch over her, everyone else in the house went to bed.

Leopold went first to his study, to write a note telling his father-in-law what had happened. Then he went to a bedroom, lay down fully clothed and fell into a very deep sleep. He was miserable, but he was also exhausted, and it seems likely that Stockmar had given him a sedative. 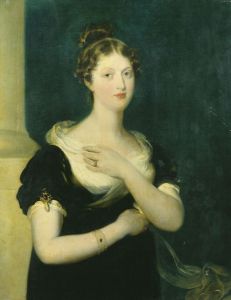