The Princess of Wales Is Making Troubles Again

There had been further rumours of a divorce. At the end of 1815 Charlotte had been ‘in despair’ at what Mercer had told her of the Princess’ alleged intimacy with her courier, Bartolomeo Pergami. ‘Surely, surely, my dear Marguerite, there can be nothing there, a low common servant …!’ But in July 1816 Miss Knight learnt from the Duke of Sussex that the Regent was ‘moving everything’ to get a divorce.

A month later, Charlotte was relieved to hear through Brougham that attempts to prove adultery with this man, whom the Princess had now made her Chamberlain, had been abandoned, ‘as they could get nothing but foreign witnesses’. ‘Thank God,’ she wrote, ‘my mind on that rubbish is now quite at rest.’

But it could not be at rest for long. The exploits of the Princess of Wales were not allowed to pass unnoticed, and rumours were constantly reaching England of her extraordinary behaviour in different parts of Europe. She was continually on the move, and English visitors who encountered raised hands and eyes to heaven and stored up their impressions to be passed on to their friends. Her appearance was embarrassingly odd: she had a passion for appearing ‘en Vénus’ and, like Nell Gwynn, sat for her portrait naked to the waist. ‘I cannot tell you how sorry and ashamed I felt as an Englishwoman,’ wrote Lady Bessborough, after seeing Caroline dancing at a ball. She did not recognize her: for one thing, the Princess was wearing a black wig. Her first impression was of ‘a short, very fat elderly woman, with an extremely red face (owing I suppose to the heat) in a girl’s white frock-looking dress, back and neck quite low (disgustingly so) down to the middle of her stomach; very black hair and eyebrows, which gave her a fierce look, and a wreath of light pink roses on her head’. ‘I was staring at her,’ continued Lady Bessborough, ‘from the oddity of her appearance, when suddenly she nodded and smiled at me, and not recollecting her, I was convinced she was mad, till William Bentinck* pushed me and said, “Do you not see the Princess of Wales nodding to you?” ‘

By this time, nearly all Caroline’s English companions had left her. The last to go was Henry Holland, her doctor, who returned to England in April 1815, unable to last the pace any longer.** She was waited upon, after this, by a motley collection of Germans, Italians and French, Arabs and Turks, but nobody seemed to stay long. ‘I was taken three German footmen from Brunswick,’ she recounted later, ‘which had formerly been soldiers in my brother’s regiment but one of them was so drunken that I was obliged to send him back to Brunswick, & I desired Mr. Pergami to find another in his place.’ Later her German maid had to be left behind, for ‘bad conduct’; a French maid was sent back to her parents for ‘very bad conduct’; her courier, Sacchini, robbed her of 200 Napoleons and was instantly sacked, and so was Restal, her piquer, or outrider, who was caught stealing the horses’ food. Mr. Pergami must have had his hands full keeping the staff in some sort of order.

** He later became Physician to Queen Victoria and Prince Albert, and was made a Baronet.

[an extract from ‘Prinny’s Daughter: A Biography of Princess Charlotte of Wales’ by Thea Holme] 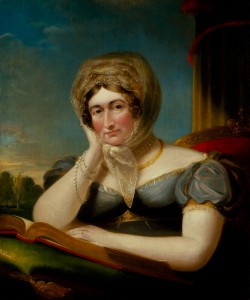